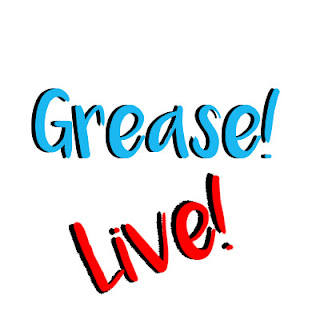 Firstly, before we jump into the review of NBC's Grease Live! I want to offer up a short review of where I have bee
n and my new posting schedule. I have been searching for a video editing software for the past two weeks and that has taken the majority of my time away from blogging. As some of you may or may not have known my family has been in the process of selling our iMac, meaning I will no longer be able to edit on iMovie. *insert crying emoji*

After more than 24 hours of my life in front of the computer I think I may have found a replacement so that I can "restart"my YouTube channel. Anyway sorry for that blurb onto the review!!
----
I saw Grease for the first time this past January so to say the least, it was fresh on my mind. With that being said I had some pretty high standards that just weren't met with this 3 hour broadway style version. Firstly let me back track and say that I wasn't expecting a perfect depiction of the movie that starred John Travolta and Olivia Newton-John.

The Julianne Hough and Aaron Tveit duo just did not cut it for me, both actors fell short on their lines and the singing was bleh even when not comparing it to the original movie. I would have preferred someone else to have been cast for both parts, but hey the director didn't ask me. The best performance by far was by Vanessa Hudgens who 'shined bright like a diamond' despite the death of her father this past Saturday.

Jessie J and KeKe Palmer also impressed me with their singing skills. Jessie J opened with Grease is the Word! and I'm very surprised in how much I enjoyed her take of the classic. We also had a few surprise performances (for me since I didn't look up the cast list ahead of time) from Boyz to Men II and Joe Jonas's new band, DNCE.

The one liberty I'm happy the director took was in diversifying the cast. The additions of Mario Lopez, Wendell Pierce as the football coach, the secretary of Rydell High, and others really added to the production.

In the end I believe this performance would've been ten times better if it had a few more extras which may come as a surprise considering the crew totalled to around 600 people, but the dance scenes were empty looking when watched on the screen.

Sadly, I must declare this a miss for me. If you enjoy bleh performances on top of bleh dancing routines and singing then yes you would love this, but if you're looking for something with a little more substance I suggest watching the original.